Hey everyone!  It's been far too long since I've posted here.  I hope you're all doing well!

A couple days ago, I met my buddy Mike in Syracuse for their annual auto show at the OnCenter.  Before I even started the trip, however, things took an unexpected turn at the Enterprise rental car counter. 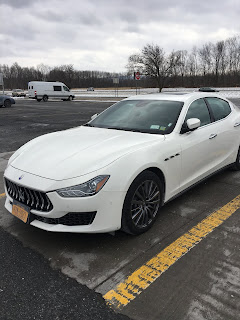 The previous evening, I decided to rent a car to (a) save mileage on mine and (b) drive something different for shits and giggles.  Enterprise had full-size cars available for $30 for the day, so I figured I'd get a Malibu, Fusion, Altima, or something of the like.  Little did I know that when I showed up to pick up the car, I would be convinced by the guy at the counter to upgrade, for an extra $125, to a Maserati Ghibli SQ4!  I debated in my head for about a minute before enthusiastically agreeing to the upgrade.

For the first hour of the trip, I really didn't like the Maserati, largely because it was not an ideal car for a long highway slog.  The ride was stiff, the seats were decent but not great, there wasn't adaptive cruise control (inexplicable, when a base Honda Civic includes it as standard equipment), the fuel economy wasn't great (between 20 and 25 mpg on the highway at a steady cruising speed, which admittedly is roughly what my 2012 Acura TL gets), the stereo was far inferior to the ELS system in my Acura, the sun visors were criminally small and didn't extend when moved to the side, and anything with a sticker well north of $70K should have a heated steering wheel included as standard equipment.   A new Malibu would've been a better highway ride, as would nearly any full-size car.

I did discover a couple interesting bits about the car, including the fact that parts-sharing is a mixed blessing.  It was disappointing to see power window switches, an engine-start button, a blinker stalk, and a headlight switch that could have come out of nearly any current Dodge, Jeep, or Chrysler vehicle.  However, Fiat-Chrysler makes infotainment systems better than virtually any other automaker, and the Maserati's system was the same ginormous uConnect touch-screen system found in a slew of other FCA products.  It worked brilliantly.  Response time was fast, the menu structure was logical, and it was extremely easy to pair my iPhone and toggle between Apple CarPlay (also brilliantly designed in itself) and the native uConnect screen.

It wasn't until after the show when I took Mike for a spin in the Maserati that it grew on me.  Driving on a mix of city streets, highways, and (most importantly) on-ramps allowed me to explore more of the car's capabilities.  The handling was outstanding; cornering was flat, grip was seemingly endless, and the steering and brakes were responsive and direct.  Hitting a "sport" button next to the infuriatingly complex electronic shift lever opened up the exhaust and allowed the Ferrari-sourced, 424-hp, 3.0 liter turbocharged V6 to sing its full tune.  And holy shit, this car had power.  I drove gingerly for the most part, but when I got it onto an on-ramp, I was able to briefly put the pedal to the metal.  The sheer force with which I was pinned back in my seat combined with the intoxicating Ferrari engine growl to remind me why people buy these cars.  I could now drive back to Albany knowing that I did not make a mistake in paying extra for this car over a standard full-size sedan for the trip.

To summarize, here are the high and low points of the 2018 Maserati Ghibli SQ4:

Would I buy one?  Absolutely not; there are too many better cars for the same price.

Would I drive one again if given the opportunity?  Abso-f***ing-lutely!
Posted by Dan at 1:46 PM