Yes, it's true, my first ever visit to Taco Bell took place this past Friday, June 22nd, at approximately 10:30 PM.  Actually, I lied.  In 2006, I did drive a couple friends from college to the Massena franchise (25 miles north of Potsdam, where I attended school at the time), but I chose the Wendys in the mall food court for my dinner, as (a) there was (inexplicably) no Wendys in Potsdam and (b) I'm not a huge fan of Mexican cuisine.  To add to the epicness of that trip, I missed a turn on the way back and wound up at what I thought was a cornfield.  It turned out to be the St. Lawrence river.  Whoops!  Given that we were in an old car (1992 Honda Accord) sans GPS or smartphone (this was early 2006), we had to have some friends MapQuest us back to campus via cell phone.  I could write an entire post about that excursion, but you're here to read about Taco Bell . . .

As previously stated, I'm not a huge fan of Mexican food, but I am a huge fan of other greasy, beefy, flatulence-inducing grub.  After some convincing from Sean (my colleague) and Jess (his wife), I decided to try it out with them after my students graduated last Friday.  I ended up liking it quite a bit.  Would I choose it over Wendy's? Probably not.  Over Burger King?  Quite possibly, depending on my mood.  Over McDonalds?  Without a doubt!  (Don't be surprised to see a fast food comparison test posted sometime this summer.)

We arrived at a fairly busy time.  One of the first things that stuck out was the ambience; it reminded me of a late-night college dining court, and brought back fond memories of Potsdam's Nite Owl.  The lady at the counter (the only one working the counter that night) was extremely pleasant, despite the crowd.  It was clean.  Lastly, the prices appeared to be extremely reasonable, on par with Wendy's (IMHO, the current champ for fast food value if you order the right items).

After much deliberation and consultation with Sean and Jess, I decided on the Three Cheese Roll-Up, the Beefy 5-Layer Burrito, the Steak Quesadilla, and a tall glass of much-needed ice water (the graduation ceremony I came from had taken place in an absurdly hot and stuffy gymnasium).  I was warned that it would be a deceptively large amount of food, but being myself, I ordered it anyway.  I left very, very full, but not disgustingly so.

I started with the Roll-Up . . . and it was awesome!!!  The cheese was a nice mixture of gooey, stretchy, and sloppy, and it was a very satisfying start to the meal.  I then dove into the quesadilla, which was one of the better ones I've had.  The burrito came last, and holy crap it was filling!  I quickly ditched the sour cream (not a fan) and dove into the beefy goodness, only to be (pleasantly) surprised by an explosion of melted cheese!

What's your favorite restaurant you took forever to go to and then ended up really enjoying?

As can be guessed by the title of the post, my 2010 Accord went in for an oil change yesterday.  This was the car's sixth oil change, and it will very likely turn 60,000 miles next week.  What???!!!  Shouldn't I have changed the oil about 20 times by now??!!  If I was to follow the old 3 month, 3,000 mile rule, then yes, I should be on my 20th oil change.  Had I followed the Lia Honda oil change reminder sticker religiously over the last two years, I would be on my 12th oil change (they recommend it every 4 months or 5,000 miles).

But, thankfully, I read my owner's manual immediately after taking delivery of my car.  I learned that, while some makes and models still go by a specified oil change interval (Subaru actually demands that, on six cylinder Outbacks, the first oil change occur before the 5,000 mile milestone), Honda (among others) now uses a "Maintenance Minder" system in its vehicles.  A computer (probably one of many) monitors how the car is driven and, by illuminating a wrench icon on the dashboard and a code in the odometer display, calls for maintenance accordingly (pardon the pun; my car is an Accord).  My car has been averaging approximately 10K miles between changes, likely due to the fact that most of my 60K miles have been easy, steady-speed miles.  Had most of my driving been in stop-and-go traffic, in colder weather, I'd likely be seeing closer to a 7,000 mile interval.

As previously mentioned, when maintenance comes due, a wrench lights up, and a code appears.  The codes can indicate maintenance needs such as oil changes, tire rotations, transmission fluid changes (which, amazingly, my car has not called for yet), various inspections, etc.  The "A1" code is the one I've gotten on most occasions, and it stands for a simple oil change (the filter doesn't even need to be replaced, though I've had this done) and tire rotation.  However, I got a "B12" code this weekend.  The manual told me that this service included the expected oil change and tire rotation, as well as the replacement of the engine and cabin air filters (something I'd done recently) and a slew of inspections.

I could have paid the dealer an exorbitant fee to do the "B12 service", but I did not.  Realizing that they'll inspect anything that could go wrong (and make them money) any time the car is in for service, and that my filters had been changed recently, I opted to pay for an oil change and tire rotation, a la carte.  Why pay for inspections that I'd get for free anyway?  I'm pretty sure I paid less than half what the B12 service would've cost.  I was out the door for about $42, including tax.  And the car checked out great!

So, here's the moral of the story.  Read your owner's manual, and only pay for what you need to pay for, even if it means doing your homework and turning down unnecessary services recommended by the dealer.  Beyond saving money, you'll be doing your part to save the environment (prematurely replaced motor oil isn't exactly the cleanest thing to dispose of).

Why I might be too old for the lawn at SPAC....

This past weekend, I had the pleasure of seeing the Dave Matthews Band at the Saratoga Performing Arts Center.  I have been privileged enough to see this band in concert over a dozen times, most of which have been at SPAC.  I've sat in the amphitheater on a few occasions (including night one in 2005 when all meteorological hell broke loose), but I've usually enjoyed the concerts from the lawn and, until this weekend, have considered this to be the preferred way to attend shows at SPAC.  I still think the lawn is preferable for most shows there, though when I see DMB there again, it will most likely be from the amphitheater, despite the price savings of lawn tickets.  Here's why:

1.  New speakers for the lawn were installed within the last year at SPAC and I hate to say it, but the old ones sounded better IMHO.  I was fairly close to the front of the lawn on Friday night and the separation of sound (clarity of each instrument) was absolutely horrid.  It wasn't as bad as listening to Peter Griffin from Family Guy throwing up in slow motion, but it was close.  It was unfortunate, too, as I thought the song selection for Friday's show was among the best I've EVER seen from DMB!  I stood farther back on Saturday and, while the mix was significantly better than at Friday's show, it still had lots of room for improvement.  I suspect that the sound would be much improved in the amphitheater.

2.  As is to be expected at a DMB show, the drunkenness and highness of the crowd was off the charts.  I had beer cans dropped behind me, and spilled onto my brand new sneakers, at least twice this weekend.  I nearly got high, secondhand, from all of the pot smoke around me.  This was to be expected, but I'm a bit less tolerant of it in my old(er) age than I was five or ten years ago.

Due to people's resulting lack of inhibitions . . .

3.  The audience behavior was atrocious.  I use the term audience behavior very loosely here, as I understand that DMB concerts are not formal events.  I also fully understand, and enjoy, cheering for a great band as they perform.  It adds greatly to the vibe of the event, when done right.  Key words: "when done right.".  If you're going to go crazy for a killer Jeff Coffin sax solo, do it when he FINISHES soloing, or at the very least when the volume on stage is at a high point, but PLEASE don't do it when he's warming into his solo.  You might think it's cool, but how the hell can you hear what he's playing if you're making more noise than he is?  And DEFINITELY don't do it during a quiet ballad!  There were some heart-wrenchingly beautiful moments on stage that were ruined by poorly timed whistles, cheers, and yells.  You paid good money to hear great music, so why not HEAR the music?  Maybe I'm just getting old and crotchety. 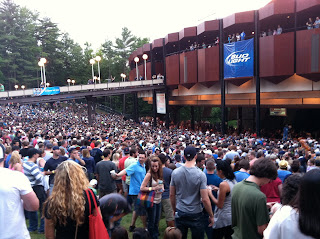 All in all.....DMB is a great band and they put on a hell of a show.  If you've never seen them live, you owe it to yourself to do so at least once!  I'll be back to see them many times. I can't help but wonder, though, how much GREATER the shows would be if people made some adjustments to their activities, listened to the MUSIC more attentively, and allowed others to do the same?
Posted by Dan at 5:35 PM No comments: