As some of you know, due to the fact that my 2010 Accord is not as good at transporting a keyboard and/or a drum set as I'd like, and due to the fact that I transport said objects fairly regularly, I had been searching for a cheap, second, used vehicle of the wagon variety for a month or so.  This search concluded a couple weeks ago when I purchased a 2002 Volkswagen Passat GLX wagon with 131,500 miles on the odometer.  It's dark gray/blue on the outside with a gray leather interior and, of course, it's a five-speed.  Now that I've driven it a bit, I figure it's time for a side-by-side comparison of my two vehicles.  Before we begin, though, here are the hard facts: 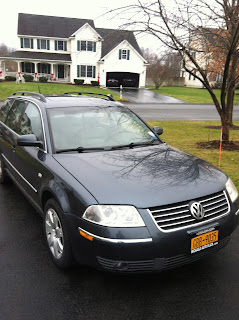 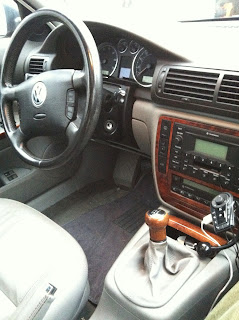 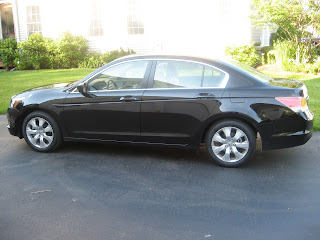 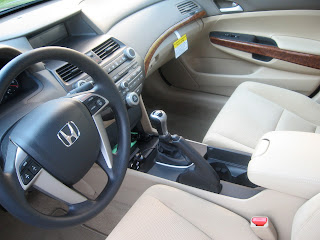 Now for the comparison:

Power/Acceleration:  Both cars make 190 hp.  However, the cars' power delivery couldn't be more different.  The Accord's engine uses Honda's VTEC (electronically controlled valve timing) system and, in true Honda fashion, makes more power the closer it gets to its redline.  In other words, there isn't a whole lot down low, but it rips once you get past 4K or 5K RPM, especially in the lower gears.  On the other hand, the Passat uses a V6 and, while it doesn't rip to the redline like the Accord's four-banger does, it has a much meatier midrange and puts down a good deal more torque (due to the fact that it's a V6).  While outright acceleration isn't as different as one might think, the Passat's more usable midrange power gives it the win in this category.  Advantage:  Passat.

Fuel Economy:  The Accord gets nearly 30 mpg on 87-octane.  The Passat gets approximately 24 on 91-octane.  Advantage:  Accord by a landslide.

Transmission and Clutch:  While the VW has a short, stubby, slick shift knob made of genuine wood, there's a reason that the critics rave about Honda's manual transmissions and clutches.  There's no comparison.  The Honda's clutch is feather-light compared to the VW and is telepathically easy to read. Its shifter is slick, direct, and surgically precise.  The VW's transmission and clutch aren't bad, but they aren't nearly as good as the Honda's.  Advantage:  Accord.

Ride:  Both cars ride firmly but compliantly.  However, the VW does a slightly better job soaking up the bumps.  Advantage:  Passat.

Steering/Handling:  Again, both cars steer (pardon the pun) toward the sporty side of the midsize car continuum.  Here, though, the Accord wins due to its perfectly weighted hydraulic assist steering and its low profile 17-inch tires.  In other words, it drives more athletically than anything its size has a right to.  Advantage:  Accord.

Quietness:  The VW's wagon body style generates a bit more wind noise than the Accord's sedan body.  However, it is superior at squelching engine and tire noise, as well as noise from other vehicles.  Advantage:  Passat.

Ergonomics:  I thought the Accord would win this category by a landslide, but this one's too close to call.  The VW's audio controls win, but the Accord's other controls are better laid out.  This one's a tie.

Interior Fit, Finish, and Ambience:  Honda builds quality products, and my Accord is no exception.  The interior materials and assembly quality are good.  That said, there are some glaring oversights.  No $24K new car should have hard plastic door panels where the arm touches.  Its cause also isn't helped by the fact that the Passat GLX's interior would look at home in an Audi A4.  Nice leather, real wood trim, lots of soft-touch surfaces, etc. will do that.  That, and while the Accord's gauges use cool-looking LEDs for illumination, the Passat's blue gauge and display back-lighting is epic!  Advantage:  Passat.

Cold-Weather Friendliness:  The Accord heats up a little more quickly and has a better defroster, but it doesn't have the Passat's heated seats, heated washer-fluid nozzles, or exterior temperature gauge that dings when the temperature dips below 40 degrees.  Functionality vs. features.  Advantage:  Both.

Sound System:  The Accord lacks the Passat's tape deck but comes with a six-CD changer in the dash vs. the Passat's single-disc player, as well as an auxiliary input jack.  Both cars have steering wheel-mounted audio controls, but only the Accord lets the driver switch audio sources on the wheel.  The Accord's also has two front power ports vs. one in the Passat, and those in the Accord shut off when the ignition is turned off (useful for not draining the battery).  That said, the eight-speaker Monsoon stereo in the Passat simply spanks the six-speaker Honda unit in the Accord as far as sound quality goes.  Advantage:  Passat.

Driver Comfort:  The Passat has leather upholstery, memory for the driver's seat, and heated front seats, as well as an auto-dimming rearview mirror (something that is incredibly useful).  Its visibility is also superior due to the wagon body style.  The Accord's front seats are firmer, more supportive, and generally better shaped, and the Honda's clutch is much more user-friendly.  Advantage:  Both.

Rear Comfort:  The Passat has leather upholstery and an individual reading light for each outboard passenger.  The seat itself is very supportive, and the Passat's center rear seat is much more comfortable than that in the Accord.  However, the Accord has rear A/C vents, as well as a more spacious bench in general (wider for three-across travel).  Advantage:  Both.

Cargo Utility:  The Accord is a sedan with a one-piece folding seatback and a small ski pass through.  The Passat has a 60/40 split-folding rear seat and it folds flat.  It's also a boxy wagon.  Even though small-items storage is vastly inferior to the Accord up in the first row, the Passat's wagon versatility wins out here, and it's why I bought it in the first place.  Advantage:  Passat by a landslide.

So, which is the better car?  On paper, the Passat is.  It won more categories, and it is several vehicles at once.  It's a luxury car, a highway cruiser, and a brilliant cargo hauler at the same time.  However, there's a simplicity to the Accord that is refreshing at times.  There are fewer electronics that can go wrong, it burns regular gas (as opposed to the 91-octane juice that the VW demands), it burns LESS gas than the VW, it's easier to drive smoothly, and it drives more athletically.  Advantage:  Both.  Both are truly excellent cars that are good at different things and don't truly fail at much of anything.